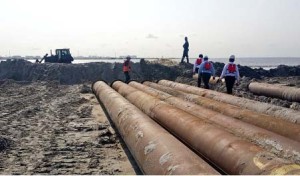 The Lagos State Government, through the Ministry of Waterfront Infrastructure Development, is set to hold a One-Day summit on development of waterfronts across the State in February, 2016.

A release today by the State Commissioner for the Ministry, Engineer AdeAkinsanya, said the summit with the theme “TOWARDS SUSTAINABLE DREDGING OPERATIONS AND WATERFRONT DEVELOPMENT IN THE STATE’’ will take an holistic approach to examing issues affectingdredging activities as well as other factors affecting waterfront developments in Lagos.

It states that the One-Day Summit will feature experts and resource persons that will speak on Waterfront Infrastructure Development and the impact of dredging activities on the environment as well as profer solutions to existing challengesby charting the way forward for a globally acclaimed waterfronts infrastructure development in the State.

The release recalled that illegal dredging activities had been a regular occurrence in Lagos as most dredgers had taken advantage of the contentious issue betweenthe State Government and Nigeria Inland Waterways Authority (NIWA) in regards to the appropriate regulatory body to oversee dredging activities in theState during the previous administration.

It however noted that on assumption of Office, Engr. Ade Akinsanya, on behalf of the state government, brokered a peace agreement between NIWA and theState in order to find a lasting solution to illegal dredging activities and its attendant problems in Lagos.

It stated further that both had agreed that the activities of illegal dredgers has led to environmental degradation and flooding in most areas where unauthorized dredging are carried out, hence an urgent need to call all stakeholders to a meeting to discuss on the way forward.

one killed in collapsed bridge in Ekiti

Facebook frustrates advertisers as boycott over hate speech kicks off

The Case Against Hushpuppi – FULL DETAILS