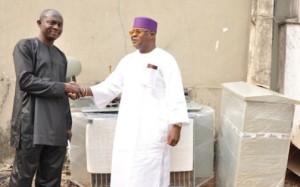 Lagos State Governor, Mr. Akinwunmi Ambode on Saturday donated a 500kva transformer to residents of Palmgroove Estate in Odi-Olowo Ojuwoye Local Council Development Area of the State, as part of the ongoing ‘Light Up Lagos’ initiative.

The Governor also donated transformers to two communities in Alapere and Ijegun respectively to boost electricity supply in their localities.

Governor Ambode, who was represented at the handing over ceremony by the Commissioner for Energy and Mineral Resources, Mr. Wale Oluwo, had read about the plight of the residents via a newspaper publication in which they appealed to the Ikeja Electricity Distribution Company (IKEDC) to come to their aid to replace their aging transformers.

The transformer at Palmgroove Estate, according to the residents, was installed in 1958 and had become problematic in the last ten years, causing it to develop fault on a weekly basis.

Oluwo, in his remarks, said Governor Ambode was of the view that if the electricity distribution companies were not making the right investment, the people would wallow in darkness, hence, his administration is poised to alleviate the suffering of Lagosians.

He recalled the setting up of a committee under the Governor’s office which included the electricity generation companies, distribution companies, gas suppliers and the Transmission Company of Nigeria, saying that the intention of the committee was to intervene as far as possible so as to ensure that the people have access to electricity.

He said: “This is part of the Light Up Lagos Project. I want the people of Lagos to understand that the Project is not all about street lights alone. Infact, street light is a small component of the Project. The intention of Light Up Lagos is to continue to intervene both in distribution area, the gas and so on in a way to facilitate the overall equation of delivering power to our people and that is what this is all about.

“It will be interesting to note that the Governor read about the plight of the residents yesterday (Friday) in the papers and we are dropping the transformer today here and in two other locations. After here, we are going to Alapere to drop another one and then Ijegun to drop the third one today,” Oluwo said.

He, therefore, encouraged residents to continue to engage government via the official channels and other channels such as the social media, print media and electronic media, assuring that the Ambode’s administration, being a people-oriented government, would always intervene as fast as possible.

Responding, President of Palmgroove Estate Residents Association, Captain Jide George said the prompt manner with which the Governor responded to their plight was worthy of emulation by other leaders, saying it was an eloquent testimony of leadership by example.

“This is very much unprecedented. I never believed that such a thing could happen where you will just put something in the papers and the Governor will respond to it expeditiously. We are ready to support the efforts of the Governor. All of us are behind him and we want to say thank you to the Governor,” George said.

Two other senior residents of the Estate, Dr. Ladi Awosika and Mr. Akintunde Adeyinka said the remarkable way with which the Governor responded to their plight was a confirmation of the fact that Lagos State is in safe hands.

They said: “We have always made representation to the power authority that they should do something about our transformer because it was always blowing up every week, and we have not been fortunate enough to get a new transformer. It was getting critical to the point that last week, we did not have electricity for about eight days and that was what made us to write to the Ikeja Electricity Distribution Company and that was what the Governor saw and decided to come to our aid, and responded in this dramatic manner just within two days.

“This is a very good development for the people of Lagos State and a very good example for other Governors to emulate,” Awosika and Adeyinka said.

HEART MELTING BIRTHDAY FOR THE MOST SAGACIOUS PERSON IN MY LIFE.

Ize-Iyamu: Obaseki did nothing for almost four years and does not deserve a second term