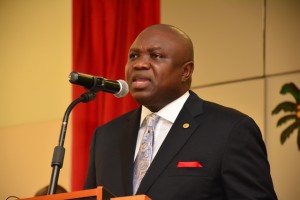 Lagos State Governor, Mr. Akinwunmi Ambode on Thursday reeled out the numerous investment opportunities that abound in the state to would-be investors in critical sectors such as Power, Agriculture, Transportation, Health, Tourism, Housing, ICT and Manufacturing, just as he assured that the state is open more than ever before for greater business.

Governor Ambode, who spoke in Lagos at the formal unveiling of the Office of Overseas Affairs and Investment, otherwise known as Lagos Global, said in anticipation of the increased socio-economic activities, his administration has resolved to prioritize the achievement of the four pillars of the Lagos State Development Plan (2012-2015) which included economic development, infrastructural development, social development and security, and sustainable environment.

The Lagos Global, which is an initiative of the Ambode administration, is a one-stop shop designed to encourage ease of doing business and help to turn Lagos into Africa’s model megacity and global economic and financial hub that is safe, secure, functional and productive.

Governor Ambode, who was represented at the unveiling by the Secretary to the State Government, Mr. Tunji Bello, said that the efforts put in place so far have ensured that the state remained the desired business having attracting massive Foreign Direct Investments (FDI) such as the $1.65 billion Lekki Deep Seaport.

He assured that the seaport would be completed in 2019 and upon completion will be the deepest seaport in Sub-Saharan Africa, adding that the Badagry Creek Industrial Park, a $1.3billion investment meant for completion in 2018 and the $12 billion Dangote Refinery and Petrochemical Park were among other investments coming to the State.

The Governor recalled his inaugural speech on May 29, 2015, where he stated the commitment of his administration to make Lagos an investment destination of choice by creating a favourable environment for local and Foreign Direct Investment.

He said: “As the world continues to acknowledge Lagos as a regional financial hub, we as government have demonstrated the commitment to strengthen this position through deliberate policies aimed at improving the business climate in our state.

“In this regard, we have successfully placed Lagos on investors’ radar by putting in place effective legal and regulatory frameworks such as the Land Reform Act, Double Taxation treaties, Limited Liability Reviews and the development of Free Trade Zones. Likewise, the on-going judicial reform is aimed at strengthening our laws for the protection of enterprise.

“Similarly, the conscious efforts of our administration at public infrastructure development and maintenance as indicated by an efficient Bus Rapid Transit(BRT), transporting over 200,000 passengers daily, functional Integrated Power Projects, enhanced security and access roads to sea and airports among others, have underscored our determination to make Lagos a functional megacity,” Governor Ambode said.

Earlier in his welcome address, Special Adviser to the Governor on Overseas Affairs and Investment, Professor Ademola Abass said the office was created by the current administration to act as one-stop shop with the mandate of promoting foreign investment into the state and managing export our of the state.

He said the office also has the mandate to manage foreign investment transaction and ensure that would-be investors enjoy seamless and hurdle-free experience by providing first class service delivery to them right from the point of initial enquiry down to the setting up and running of businesses in the state thus eliminating difficulties and bureaucracies often associated with multi-agencies handling of investments.

In his keynote address, renowned economist and social crusader, Professor Pat Utomi said the creation of Lagos Global is a major step towards transforming the state to modern city-state just like the advanced ones in the world.

He said Lagos economy must therefore be a 24/7 economy, and that the growth of the state requires significant cooperation from neighbouring states.

Macron: Why I chose to visit Afrika Shrine