Lagos State Governor, Mr Akinwunmi Ambode on Friday justified the decision of the State Government to shut down the Olusosun dumpsite in Ojota, saying the location of the facility was no longer healthy both for trading activities and residents living in the neighborhood. 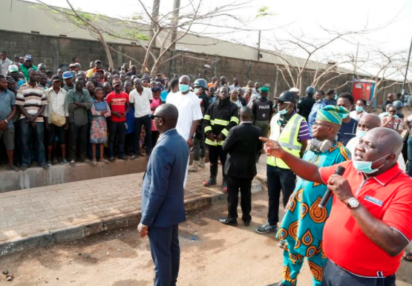 Governor Ambode, who spoke while addressing scavengers and other workers at the site following the outbreak of fire last Wednesday, said aside the negative health implication of the site to the people, the structure of the facility was also risky and susceptible to all forms of hazards like the fire outbreak.

The Governor, who was visiting the site for the second time since the fire outbreak, said though it was gratifying that there was no casualty, the closure of the site became necessary owing to the need to forestall future occurrence and protect the health of residents.

“You see what happened is not as if anybody deliberately put fire there. It is the refuse that are dumped there as well as the gas coming from underground and the hot sun which was around 36 to 38 degrees that caused the fire. We thank God nothing bad happened to those living there and around the neighborhood.

“What we have decided now is that there will not be dumping of refuse here any longer. But the most important aspect of it is that I cannot open my eyes and allow diseases to befall you here. At the end of the day, it is government that will still care for you. So, we have to sit down and agree.

“We might say we are looking for what we want to eat but may God not allow us to see what will harm or kill us. I don’t want to stop your trade but I also don’t want to fold my arms and allow diseases befall you.

You may not have diseases now, but you see in this area, there is no way you can say you are looking for money without contending with series of hazards and a clear example is the fire outbreak,” the Governor said.

Governor Ambode said in as much as government was unwilling to make people in the area lose their means of livelihood, but that it was important for all the stakeholders to agree on what to be done going forward.

“I have not come to disturb you; what should be removed will be removed; we are not dumping waste here again. What will benefit all the people here is my concern. But we have to take it one after the other and we want all your leaders to cooperate with us.

“If not for the fact that we have fire stations, vehicles and fire officers, the fire would have spread more than this and if the fire had spread to the petrol station, that would have been a major disaster and we don’t want that to happen. “It’s too dangerous to have this petrol station and other things here.

It’s for your own good and for your own health. But we are not here to cause pain for you, we would first of all make sure that we close down the dumpsite and then at the same time engage all of you so that we can talk and see how we can improve on the environment and also make life bearable for you and your children,” Governor Ambode said.

Also speaking, Commissioner for Information and Strategy, Mr Kehinde Bamigbetan said the visits of the Governor and the decision of the State Government to shut down the site was to protect the people and the environment and to ensure their health and safety. While directing waste collection operators to make use of the landfill site at Owu Elepe in Ikorodu and that of Epe, Bamigbetan also unveiled plans to transform Olusosun dumpsite into parks and gardens, among others, starting with perimeter fencing.

“Consequently, waste collection operators are directed to use the landfill site at Owu Elepe in Ikorodu and the second one in Epe. The government has also decided to fence the site. Other efforts to contain the situation include the decommissioning of the site to facilitate alternative use for parks and gardens and other projects. This action is in line with the Cleaner Lagos Initiative (CLI) of this administration and conforms with international best practices,” Bamigbetan said.

Sanwo-Olu to inaugurate projects to mark one year in office