Speaking during a training programme at NECA House, Alausa Ikeja, the Commissioner for Establishment, Training and Pensions, Dr. Akintola Benson Oke said only a systemic bottom to top approach can effectively inform the people of government’s good and lofty intentions.

While admitting the complexity of influencing the perception of the citizenry, he said it will be systemic to ensure that government actions are communicated in the most accurate and positive manner based on the available data at government’s disposal.

He stated further that plans and programmes without data will end up in futility, adding that government can be more effective if its workforce present data-based ideas which capture everyone in the framework of the State.

Oke also advised participants at the training to embrace a customer-centric approach where customers are treated like kings and interest of the citizenry is prioritized.

The Commissioner assured participants that the Akinwunmi Ambode administration is unrepentant in its dogged belief in training civil servants to be better equipped to accurately and effectively communicate government programmes to citizens.

Also speaking at the training, the Founder/President, Lagos Business School, Prof. Pat Utomi, who noted that trust is the only way credibility can be built, urged civil servants to learn the culture of being deliberate in action and living up to their promises.

According to Lagos state government house correspondent, hhe explained that processes for anyone to lead well or succeed in their discipline are to understand themselves, have clarity of the message as well as expectations therefrom, and never work with assumptions and presumptions. 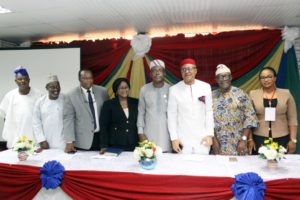 Earlier, the Permanent Secretary, Office of Establishment and Pensions, Mrs. Rhoda Ayinde encouraged participants to pay attention to every bit of the training, noting that information from the sessions would transform their mode of operations at work.

COVID-19: Lagos, Abuja have more cases than 34 other states combined

Ambode is a progressive Thinker say’s Juwon an Advertiser