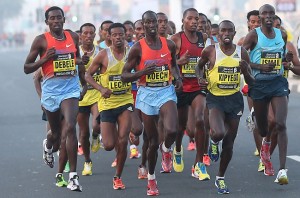 In furtherance of its determination to achieve excellence through sports, the Lagos State Government on Tuesday said it has concluded plans to ensure a hitch free staging of theFebruary 6 International Marathon held last in 1983.
The Lagos Marathon is expected to be declared open by the State Governor, Mr. Akinwunmi Ambode, while the President of International Association of Athletics Federation (IAAF), Lord Sebastian Coe with his other counterparts from over six countries are expected to grace the event.
In a joint press briefing by the Ministry of Information and Strategy and the State Sports Commission at the Alausa Secretariat, the government assured that everything needed to ensure a successful tournament has been put in place.
Commissioner for Information and Strategy, Mr. Steve Ayorinde said out of the over 100, 000 forms made available, 12, 000 athletes have already confirmed participation, adding that 60 international participants in the male category have been confirmed, while a total of 20, 000 participants are expected to register.
He said out of the 20 gold class marathoners in the world, 18 have already confirmed their participation in the male category, while 6 gold marathoners in the female category have also confirmed participation.
He said the international participants are joining from countries such as Kenya, Ethiopia, Bahrain, Eritrea, Morocco, Cameroun, Uganda and India, while about 120 professional athletes in Nigeria will slug it out with their foreign counterparts in the tournament.
The Commissioner disclosed that the starting point of the marathon would be at the National Stadium in Surulere by 7am, and would move through Western Avenue, Ojuelegba bridge, Jibowu bridge, Ikorodu Road, underneath Anthony bridge, underneath Maryland bridge, Ojota, Alapere, 3rd Mainland bridge, Osborn Avenue, Ikoyi bridge, Admiralty way, Lekki Concession Toll Gate, Ozumba Mbadiwe, 1004 Estate, Ahmadu Bello Way, Federal Palace Hotel, Silverbird Galleria, NTA, Bar Beach and then terminate at Eko Atlantic.
According to Ayorinde, the duration of the marathon is 42.195km, while the total prize money for sixty winners in the different categories of the tournament is N92 million.
He said the winner of the first prize will smile home with $50, 000, while the second prize winner will get $40, 000, while the third prize winner will get $30, 000.
In the Nigerian category, first prize winner will get N1 million; second prize, N750, 000 and N500, 000 for third prize.
Speaking on the specific roles of government agencies, Ayorinde said the Ministry of Health would provide medical services, and that there would be ambulances at strategic locations to take care of any emergencies.
He said his Ministry would coordinate the awareness of the State Government concerning the tournament, while the Ministries of The Environment and that of Transportation would monitor and ensure proper cleaning as well as the routes to be used by the participating athletes.
He said the Lagos State Traffic Management Agency (LASTMA), together with other traffic management agencies would be in charge of the alternative routes already created for commuters who may like to go about their normal business activities.
He further disclosed that adequate security measures have equally been put in place, adding that there have been provision for permanent and static mobile deployment of 100 security personnel to cover each vulnerable points such as the pre-event venue and hotel accommodating the foreign athletes and guests for 10 days prior to the event.
Also speaking, Special Adviser to the Governor on Sports and Chairman of the Lagos State Sports Commission, Mr. Deji Tinubu said the security personnel were drawn from the Nigerian Army, Navy, Airforce, Police, Nigerian Security and Civil Defence Corp (NSCDC) and the Department of State Security, while five boats will also be deplored.
Tinubu added that in line with the commitment of Governor Ambode, there are plans for the event to held yearly, and that the ultimate goal is that it should be the biggest marathon event in Africa, and permanently be logged on the IAAF time table.
He added that there have equally been provisions for transponders to prevent cheating, which would also reduce the number of personnel needed for the tournament.

5 quick things to know about the Lagos City Marathon

Man cries out over domestic violence.