Recently (about three weeks ago), residents of Orinyanrin; a sprawling community in Akute under Ifo Local Government Area in Ogun State were startled to find a giant notice board erected by the main entryway to their community. The notice board which simply reads: OBASANJO HOLDINGS NIG. LIMITED 08037163896, according to members of the community was a sign of an impending trouble with one of the most influential figures in Nigeria; the Former President Olusegun Obasanjo. 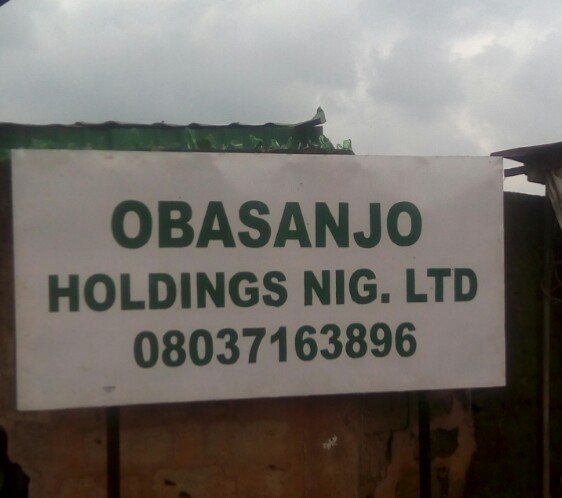 According to Babajide Odusolu who claims to have resided in the community for over two decades, this is not the first time the community have had to deal with the former President. Odusolu explained that over a decade ago, at about the time Chief Olusegun Obasanjo was being released from Prison and about to become a Civilian President, members of the Orinyanrin Community had received a similar notice.

“Historically, the entire Oririnyarin Community was said to belong to Obasanjo who had acquired it when he was still a Military Head of State for Farming Purposes just the same way he had acquired other plots around the country. But the land was never utilized for farming and had remained fallow ever since. When he was imprisoned by the late General Sanni Abacha, the Omo-Onile’s in the area encroached on the land and sold most of the entire land to unsuspecting members of the public”, Odusolu explained.

“After Obasanjo was released from Prison, the Omo-Oniles were chased away from the land and those that had already bought from them were left with no option than to go into negotiations with representatives of Chief Olusegun Obasanjo. It was eventually resolved at that time that those persons that had bought plots from the Omo-Onile should pay certain amounts to the Ogun State Property and Investment Company (OPIC). OPIC was to stand as channel of payment for the land to Obasanjo”, Odusolu further highlighted.

“Ever since, there have been relative peace in the community until now that this new Sign Board was erected. It is a sign of impeding trouble and who in this community will be able to face Chief Olusegun Obasanjo?”

Another Landlord in the Community who does not want his name mentioned who spoke with EKOCITY MAGAZINE, says a call has been made to the phone number on the Sign Board and it belongs to one Alhaji Sheu who claims to be the Jagunmolu of Owu Town in Abeokuta. “He says that Chief Olusegun Obasanjo is the one that have instructed them to come and erect the sign board and that the entire community belongs to the Former President. When asked if he knows the entire area is now fully developed with houses, he said that is none of their business and that anyone who wants to have a discussion should come to a particular address in Abeokuta with proof of ownership of his plots”.

“We are surprised by this new development because all the landlords in this area have actually gone to pay certain amounts of money to OPIC as ratification fees as directed by representatives of Chief Olusegun Obasanjo then. A lot of us are bothered even though we are now making concerted efforts to go and meet the man whose number appear on the Notice Board to understand the reason for the new development”.

We wondered why members of the community have not approached OPIC for clarification of the issue, but another Landlord, Bantale Ayinde (not real name) explained that OPIC have not been to useful so far on the matter. “You know the leadership of OPIC have been changed more than five times over the last two decades and we suspect that some monies may not have been properly remitted to the former President Obasanjo. Anyway, we are determined to fight our case and protect our belonging in the most peaceful and civilized manner”, he explained. Representatives of OPIC could not however be contacted as the point of filling in this report.

EKOCITY MAGAZINE visit to the Oriyanrin Community shows that more than 100 houses dot different portions of the land the former President is laying claims to. Sections of the Ogun River borders the Community with Akute. The Lagos State Water Corporation also have it water treatment plant and independent power plant located near the community.

A plot of land within the Oriyanrin Community sells (now only available in the secondary market) currently for between N5million and N7million per plot. According to Alatishe Abbas an artisan who resides in the community, the Orinynrin land has been a hot-cake within the Akute Area because of the fact that is the only area where Omo-Onile does not disturb a landowner when he or she is building his house. “Since Obasanjo came out of Prison and the Omo-Onile were chased out of the land, they have since kept their distance”, Abbas explained.

Winners at the 2016 AMAA Awards

Execujet suspended for flying Naira Marley to Abuja for concert

Onaiyekan, CAN criticise Buhari over killing of priests, insecurity